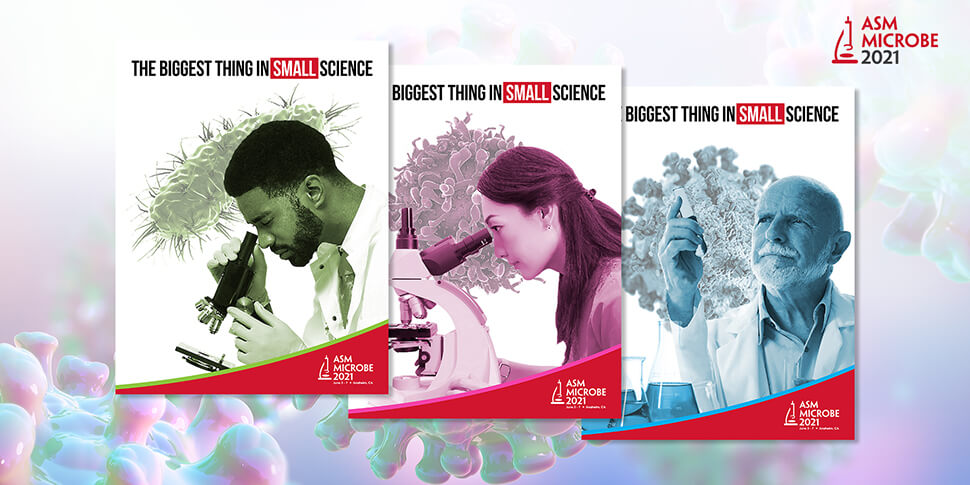 Whenever BlueFusion works on any project, we typically like to present a minimum of three concepts to the client. As a result, we often end up with strong creative ideas that for one reason or another didn't move forward. So while not every design is going to work for a given project, we occasionally like to show a few of these ideas nonetheless.

This campaign concept was developed while working on ASM Microbe 2021. The client wanted to focus on the idea of "small science (i.e. microscopic) being a big deal." This was being proven to be especially true in the face of the Covid-19 pandemic.

For the concept, we came up with a treatment of pairing an individual microbial scientist with a single microbe which was magnified thousands of times. We then converted that composited image into a duotone to give it a clean, eye-catching look that would translate nicely in print and digital materials. Finally, we added a subtle oil paint effect. The unique microbiologist/microbe composition was a creative way of present small science in a big way

Ultimately the idea was a bit too ambitious, as it would have required the development of individual compositions for each of the eight different microbial science subspecialties covered at the Microbe meeting. In the end, it was simpler and easier for the campaign to go with a single, generic image.
Project:
Client: